It’s interesting to point out that usually when the market gets hot, more sellers try to sell For Sale by Owner. So you’d think FSBO rates would be climbing. In fact, the opposite is true. NAR reports that FSBO sales in 2015 were at the lowest rates since data collection started in 1981, while rates of working with an agent were climbing.

It’s clear the vast majority of home sellers realize that selling FSBO is a bad idea. Here are four reasons why it isn’t the best choice for most sellers. 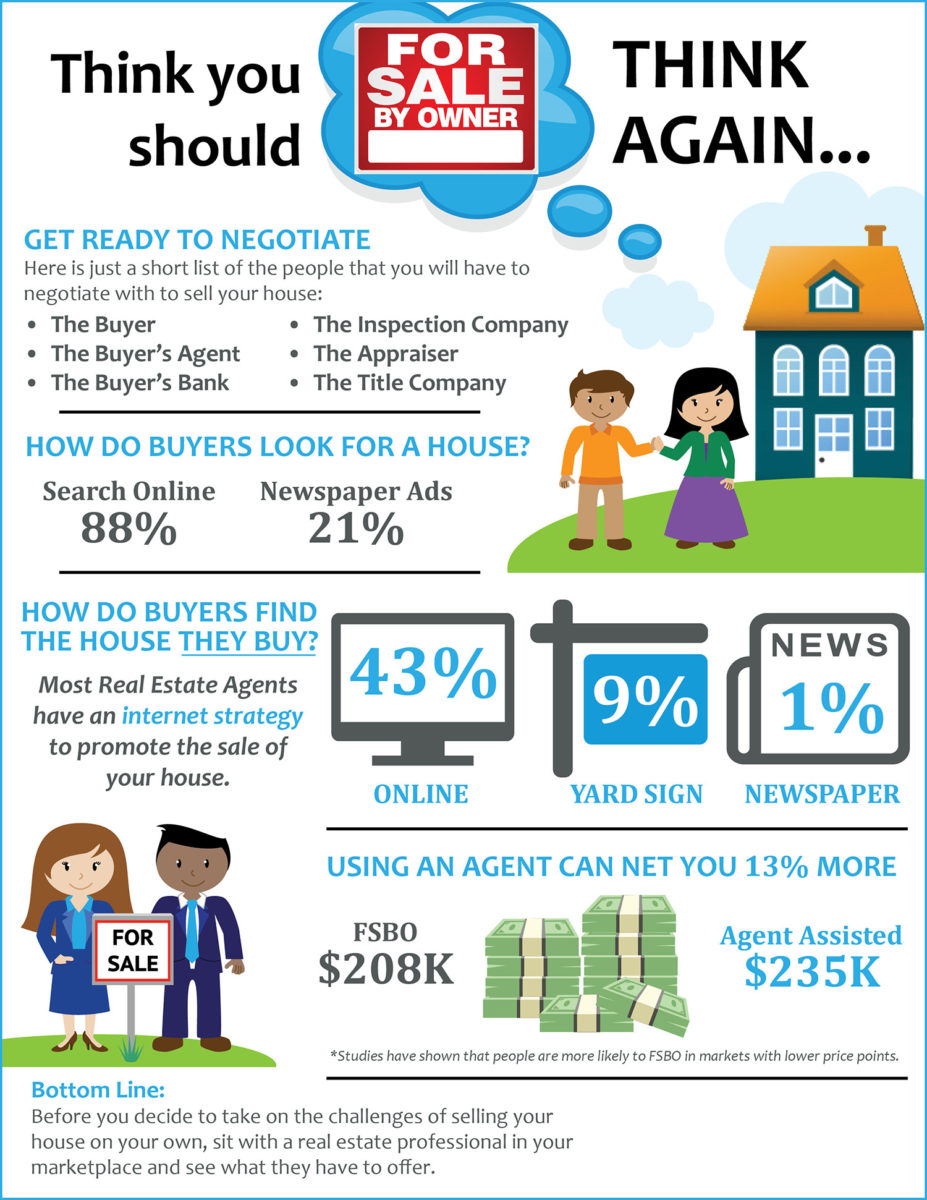 Most sellers who go FSBO are hoping to avoid paying a commission and put more money in their pocket. The problem is, this only works if the home sells for the same price or more when it is sold FSBO. This isn’t what happens. According to NAR, the typical FSBO home sold for $185,000 in 2015. The typical agent-assisted home sold for $240,000. That’s a difference of more than $55,000 – far more than the average commission for a $240,000 (approximately $14,000). That FSBO owner who wanted to save money stands to lose 30 grand!

In most cases, the tactics FSBO sellers are using to market on their own, aren’t the right ones to attract buyers. 85% of FSBO sellers use yard signs, word of mouth, online classifieds and open houses to sell their homes. This would be great if these were the methods buyers were using to find homes, but they’re not. 85% of buyers are using real estate agents and the Internet (mostly MLS listings) to find their next homes.

FSBO sellers also miss out on the best sales tool around – the agent. There’s an old joke that the “Four Ps of Real Estate” are Put a sign up, Put it on the MLS, Put up a flyer and PRAY. Well, good agents do a whole lot more than that. Agents who are specialists in their markets know the market, who’s looking to buy, and who else is selling. If someone is looking for a house like yours, they’ll know who to call to get things started. If a home similar to yours comes on the market, they know what you need to do to be the one that gets the offer.

FSBOs and agents tend to play different games when it comes to negotiation. Many FSBO sellers think selling real estate is “deal or no deal.” Agents understand there are many ways to make a buyer and seller come together, and are able to negotiate something that works for everyone.

Selling your home isn’t just about getting the price you want – there are other elements that matter too, such as timing, financing, inspection contingencies, and much more. FSBO sellers aren’t familiar with the give and take of putting a deal together, nor do they know how to protect themselves when things go sideways. This causes them to get a lower price, and a higher chance that offers will fall apart and the home won’t sell, along with a higher chance of legal problems in the future.

You wouldn’t try to play in the Final Four without years of practice. A great basketball player makes their job look easy but their success is based on thousands of hours of hard work. It’s the same with a great Realtor. There are thousands of hours or hard work, business experience, marketing knowledge and technology investments standing behind every seemingly-easy home sale.